This blog will not be updated here anymore. Please visit the new site

Source Code is a clever thriller, that toys with its sci-fi elements without ever becoming too much of a geekout. It has an interesting premise that might be familiar, but not so familiar that it’s boring already. Jake Gyllenhaal is brilliant in the lead role, exactly the right actor for this part, showing us the confusion we would expect but also the determination to get out of it without becoming a cleancut hero. He makes mistakes and overreacts at times, making him all the more believable. The movie has fun with its premise and the direction and screenplay constantly keeps up the suspense and surprises.

After my article on school shootings, I immediately wanted to do more, although it was relatively hard work, just because it’s not so easy to find helpful information. But I really want to dig deeper into this and find out more, find similar threads and patterns and ways the media deals with this. So, today, three more examples, all from 2006.

The Conspirator tells an interesting story in a boring way, which is too bad. The casting and acting is excellent and if nothing else, the movie is almost worth watching many good actors. But not much is done with it, at least not more than is absolutely necessary. It’s a solid movie with an obvious message, which I will get to in a second. The movie takes too long to get going, giving us the whole Lincoln assassination without giving us a clue what the movie will be about for fifteen minutes. Only then the real story comes through and inbetween the movie also spends time with too many things that seem irrelevant.

I was sitting in a teacher’s room yesterday when a young teacher came in. He just had a lesson for his teacher’s training in which his supervisor observed him. The way this works is that you plan a lesson, meticulously, then you give the lesson and afterwards there is a discussion if you did well. The trainee teacher was optimistic at the beginning of this talk, obviously satisfied with the lesson. At the end of the talk, after about fifteen minutes where I partially eavesdropped on it in the teacher’s room, he had his head in his hands, slumped in his chair, defeated by the criticism he had to hear. Granted, I didn’t see his lesson and I don’t know him very well. Maybe he sucks as a teacher, maybe his plan was awful, maybe he is really delusional about his teaching abilities. But something about that progress from enthusiasm to slump stayed with me.

Twilight: Breaking Dawn, Part 1 (I’ll never fully get used to those semi-part names) is, well, an entry in the Twilight series and I’m not surprising anyone by saying it’s not great. It’s silly and boring and too long and weird. I haven’t seen the last part of the series but it didn’t really matter, I had no problem getting into the story, which mostly comes from the fact that there is a minimum of story. Enough people wrote about this movie, too, so I don’t need to get into the whole abortion/pro-life debate, also because I find it somewhat boring. I feel the movie is more ambiguous about it than most angry people say and it fits that it raises question it doesn’t want to answer. Just like its incredibly passive main character Bella, the movie is very good at whatever.

Okay, for the grand finale I have to rush an article because time is running out. I’m always trying to do seven articles for theme weeks, which just shows how much the breaks between posts are necessary. But I did it again and am proud, so there you go. Anyway, here is a quick rundown of some posters from 1988, but it’s not a complete analysis like in the last theme weeks, but more a snapshot of mostly bad examples. So, this is not representative but exemplary. 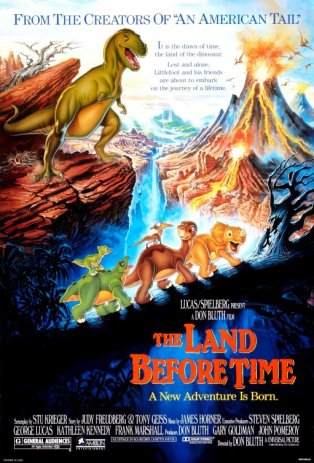 (spoilers ahead, which is only really relevant if you’re under 6, the movie is not that unpredictable)

The Land Before Time is a rather typical animated movie for its time, I’d say. I probably saw it as a kid but rewatched it now because I’m intrigued by children’s movies and the messages they’re sending. This movie is okay, I guess, but so clearly aimed at children, meaning it tries to be cute and soft all the time, with a fair amount of scares to balance it out. There isn’t much for adults here, which in turn means I think it’s not great for kids either. It doesn’t hurt them (depending on how harmful you view its messages), but it also doesn’t challenge them, except for emotional manipulation. It’s not a movie I necessarily would show to my kids.

Because of the amazing comics that have been released in 1988, I decided to have another comics section in this theme week. Grant Morrison and Alan Moore are big enough names for this, I guess, but we shouldn’t forget Jamie Delano. I’ll just focus on the issues published in that year, since that’s enough already. Let’s go!

Akira is one of the most visually stunning movies I’ve ever seen. I didn’t get everything about the plot, but I mostly didn’t mind because the images were so impressive and amazing that every frame is worth admiring. It’s also a fearless movie, willing to go any place it wants to go, no matter if it’s violent or nightmarish or apocalyptic or sleazy. Again, I’m not sure about the story exactly but the movie is never boring and always astonishes you with a new set piece. Its world is complete, so fully fleshed out, that it is very easy to fall into it. Sometimes you don’t know exactly why the characters are acting the way the do, but you don’t care as long as you can follow them through this world of Neo Tokyo, with its fascination for technology and brain power. It is no surprise to see Akira was very influential for many filmmakers. It’s impossible to watch this now and not think of The Matrix, to name just one. It is simply an impressive movie.